Finding a sense of belonging 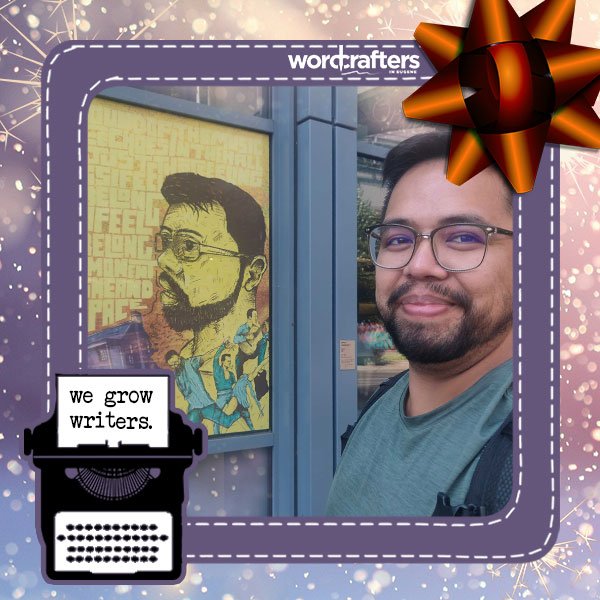 Finding a sense of belonging

Jeff Velez is a writer, not a dancer.

He loves to dance. It connects him to the community and to its people. The dance community in Eugene gave him a sense of belonging. Sharing his story with others through StoryHelix, Wordcrafters’ community storytelling program, took it a step further.

“The more I come out of my shell and not be so closed off, the better off I am as a person,” he says.

When he first moved to Eugene, he mostly kept to himself.

“My first year and a half, I didn’t have any friends, and it was tough,” he says. “I didn’t really have a community. It was just work and gym, work and gym.”

He’d danced before, doing ballroom dancing in high school, but hadn’t danced in a while. So he was reluctant to get back into it. “I wasn’t very good. But once I met the people, that’s what kept me there.”

Jeff recorded his StoryHelix story over Zoom, as he and a friend interviewed each other.

“It was kind of weird at first. I didn’t know how to go about starting a conversation. But as soon as we started talking, it was very organic. it felt very comfortable.”

The conversation let him see their similar perspectives, but from different points of view.

For full disclosure, Jeff is married to Wordcrafter’s StoryHelix coordinator, Leah Velez. While they may have opened the door for him to participate in the project, he says, “I definitely wanted to share my part of the story. Especially being BIPOC and living my last five, six years in Eugene, appreciating it for what it is and where it’s going.”

“Once we started talking. It turned into a conversation, me and a friend, just shooting the breeze and talking about our life, Eugene, and our experiences in Eugene, better for worse.”

Being part of StoryHelix is meaningful to Jeff.

“Just having it out there makes me feel good,” he says. Jeff hopes it inspires other people to participate, too. “We need to hear those stories.”

The power of StoryHelix is in its spoken-word form of storytelling. Not everyone is a writer.

“That’s the thing I struggle with the most. I’m not a very strong writer. It takes me forever to finish a book,” Jeff says. “But being able to talk to somebody feels natural. It gave me an organic and natural way of telling my story which was comfortable to me.”

StoryHelix is funded entirely by grants and support from donors like you, who know the power of story in shaping lives and communities. The stories we tell matter.

Your donation will give others the opportunity to tell their story and create the community we want to live in.

I want to help!